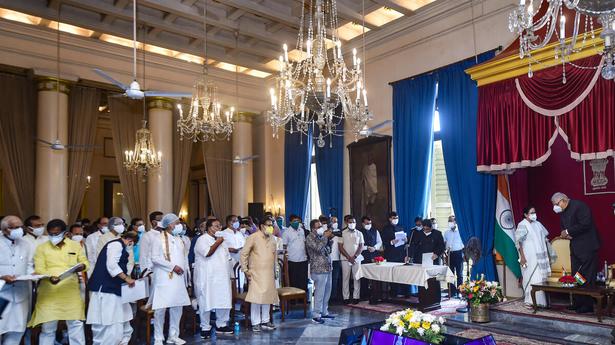 The Chief Minister will also be in charge of Land and Land Reforms, Information and Cultural Affairs and North Bengal Development departments.

West Bengal Chief Minister Mamata Banerjee on Monday retained the crucial departments of Home and Health in the allocation of portfolios to the State’s Council of Ministers. Along with these the two crucial portfolios, Ms Banerjee will also be in charge of Land and Land Reforms, Information and Cultural Affairs and North Bengal Development departments.

The list of ministers was a mix of old and new faces, giving adequate representation to women and legislators from minority community. Eight women have been inducted into the Cabinet apart from the Chief Minister. The Council of Ministers includes seven members of the minority community. Ms. Banerjee also accorded adequate importance to each region and district and members of the Cabinet are from 20 out of 23 districts of the State.

Former Finance Minister Amit Mitra, who did not contest State Assembly polls has been allocated the charge of Finance again and Partha Chatterjee has been appointed Minister of Industry and Commerce Department. Rathin Ghosh will be new Minister of Food and Supplies Department and Gholam Rabbani will be minister in charge of Minority Affairs and Madrasah Education.

Manas Ranjan Bhunia, a Rajya Sabha MP from Trinamool Congress who had held key portfolios as a legislator of Congress in the first cabinet of Ms. Banerjee has been given Water Resources Investigation and Development. Siddiqullah Chowdhury retains his portfolio of Mass Education Extension and Library Services and Sashi Panja Women and Child Development.

After 43 ministers were sworn in, Ms Banerjee announced that two new Ministers Asima Patra and Partha Bhowmick will be inducted in the State council of Ministers later.

Later in the day the Chief Minister held a meeting with representatives of different religious groups and urged them to take steps to contain the pandemic. The Chief Minister maintained that she was not in favour of a complete lockdown, but restrictions imposed will continue in the State. Ms Banerjee also welcomed the initiative of Imams of Kolkata not to hold prayers at Red Road on the occasion of upcoming Eid- ul- Fitr this year because of outbreak of COVID-19 pandemic.