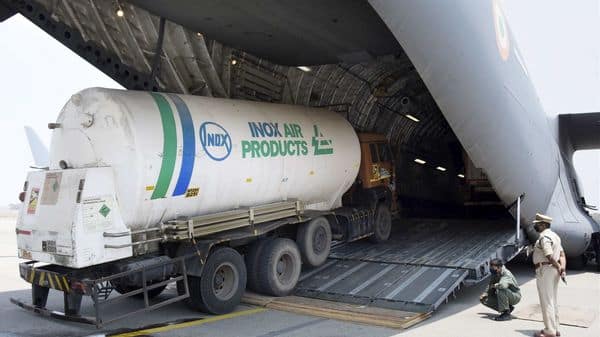 NEW DELHI :
As the country is facing an oxygen crisis amid a massive surge in covid-19 cases and hospitals are demanding more of the life-saving gas, Odisha has stepped up Oxygen supply and in last two and half days have sent 870 metric tonne of medical oxygen to badly hit states, including Delhi, Maharashtra and Uttar Pradesh.

The state has created a “green corridor” for the uninterrupted movement of oxygen vehicles from four industrial districts and police is escorting each of the tankers till the state border points, Y.K Jethwa, the additional director general of police (ADG) in Odisha said over a telephone interview.

Jethwa who has been designated by the Naveen Patnaik government as the nodal officer in charge of oxygen supply movement to other states, said Odisha has ramped up production and its industries are rising to the occasion and demand.

“As we speak, we have escorted 869 MT of medical oxygen so far (in past two and half days). More are on their way. At least 49 large oxygen tanks have left the state,” said Jethwa, adding that tankers are making beeline at designated oxygen filling locations.

“A dedicated green corridor has been set up with round the clock monitoring. Odisha Police is committed to ensure that there is no delay in loading and transporting so as to promptly serve thousands of patients in Uttar Pradesh, Delhi, Haryana, Maharashtra, Andhra Pradesh, Telengana and other needy states,” the ADG of Police said.

He said each of the tankers are being geo tagged to track them better, and each of recipient states where it is intended to reach is in touch with Odisha administration. He said around 20 rankers are being dispatched per day.

Odisha’s response comes soon after chief minister Naveen Patnaik spoke to Prime Minister Modi and few of his state counterparts and offered them to help with Oxygen on 22 April.

“The CM said it is a war-like situation & Odisha will extend all cooperation at the national level including ramping up oxygen production to assist other states in this emergency,” CMO Odisha said in a tweet on 22 April. Following the interaction with PM and CMs, Patnaik formed a special cell under Jethwa in charge of it. On Sunday the CM in a video message also touched how his state is supplying oxygen to six states.

Several states like Maharashtra and Delhi are facing a massive health crisis, which has stretched their healthcare facilities, and oxygen stocks. Hospitals have openly aired their helplessness and have sent out distressed calls to the government about the thinning oxygen supply. States like Delhi and Rajasthan have reported death of patients in hospital due to lack of oxygen in last couple of days.

The supply is being sent from four key localities– Rourkela in Sundaragh district, the Kalinga Nagar industrial zone of Jajpur district, Anugul, which is home to several steel and aluminium companies, and Dhenkanal, a mineral rich district with small to medium steel plants.

Union steel and petroleum minister Dharmendra Pradhan is in touch with all the steel companies and also with Odisha administration and he has directed the steel plants to provide all support in oxygen supply, his office informed in Delhi. The ministry said at least 568 MT of oxygen was supplied to Maharashtra through the steel plants alone on 24 April, followed by 220 MT to Madhya Pradesh and 185MT to Chhattisgarh. Total daily medical oxygen production capacity of steel plants is 2834 MT. In the Steel Sector, there are 33 oxygen plants (both with CPSEs and in Pvt.) of which 29 are tapped regularly, the ministry added.

Mumabi: Ex-MD of Tops Grup second to be held in money-laundering case – Times of India

Karnataka: 24 die allegedly due to oxygen crisis in Chamarajanagar – The Indian Express