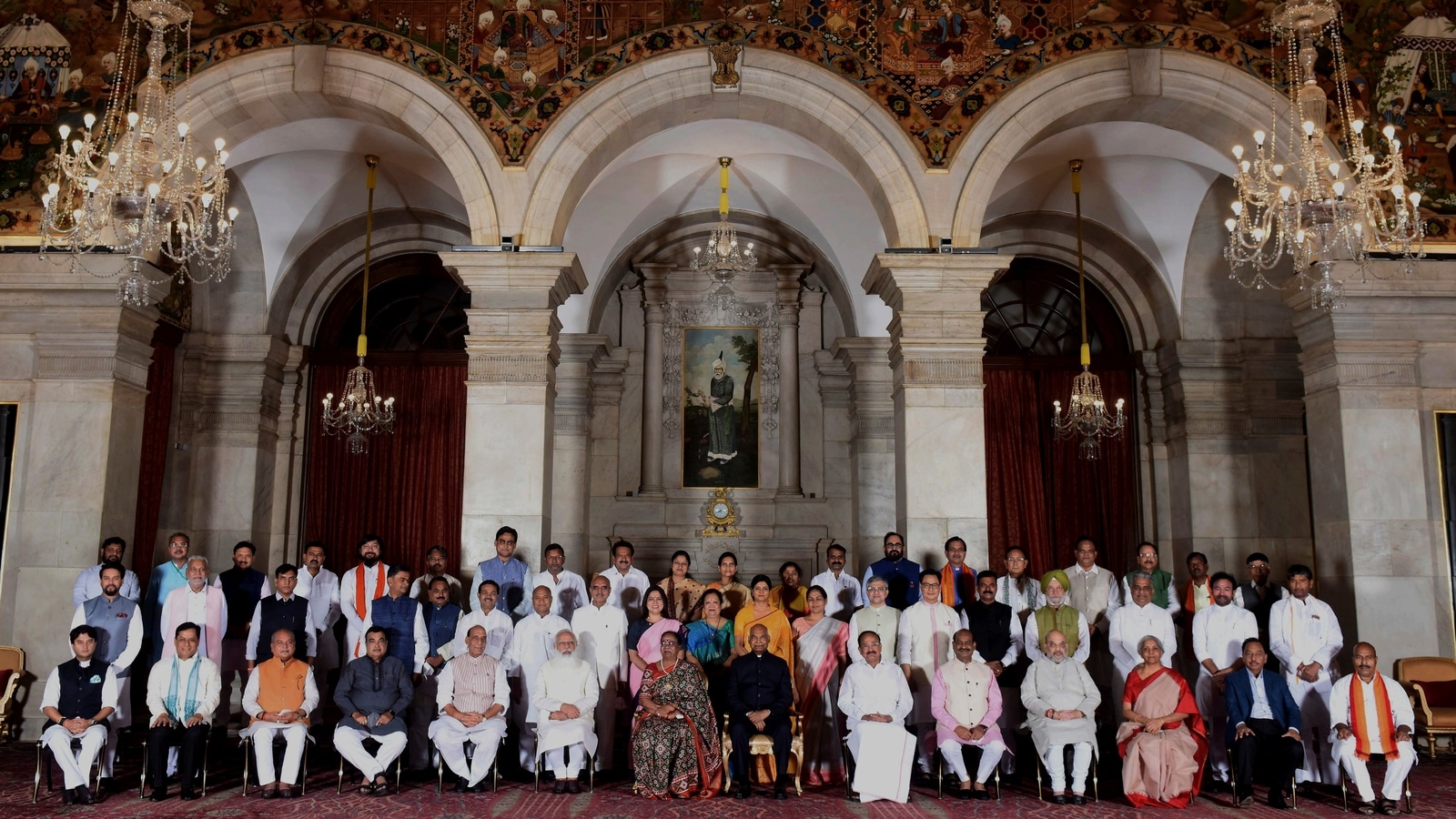 Prime Minister Narendra Modi on Tuesday inducted 36 new faces into his council of ministers, promoted seven junior ministers (to independent or Cabinet roles), and dropped 12 ministers, including the ministers of health, education, information technology, law, environment and information and broadcasting, in his biggest reshuffle ever in the past seven years, and the first major one of his second term.

In the new 77-member council, only 30 Cabinet ministers and two ministers of state with independent charge will manage all Union ministries as the government trained its focus on enhancing synergies between departments.

The changes seem to have been motivated by performance (or lack of it); the need to accommodate allies, find room for Bharatiya Janata Party (BJP) leaders who were asked to sacrifice regional aspirations, and include lateral entrants; and an eye on coming elections in major states. Of the 36 new ministers, three are from allies of the BJP.

“I congratulate all the colleagues who have taken oath today and wish them the very best for their ministerial tenure. We will continue working to fulfil aspirations of the people and build a strong and prosperous India. #Govt4Growth,” tweeted Modi shortly after the swearing-in ceremony.

A meeting of the Union Cabinet is likely at 5pm on Thursday, followed by a meeting of the council of ministers at 7pm, said people aware of the developments.

They were inducted on the basis of their strong record as administrators and organisational capabilities.

“Under the able leadership of honourable Shri Modi ji, I will follow the ideology of the party and discharge any responsibility given to me to the best of my ability and dedication,” said Scindia.

“Thank you Hon’ble PM @narendramodi ji for this great opportunity to serve the Nation and for your encouraging words. Under your guidance, we will dedicate ourselves to build a strong and prosperous India,” tweeted Sonowal.

They were dropped at a time Covid-19 has ravaged the healthcare sector and derailed education, and when India is locked in a legal tussle with prominent social media companies over the country’s new Information and Technology rules.

Five themes are evident in the reshuffle, which takes the overall size of Modi’s council of ministers to 77, excluding the PM, just four short of the maximum possible 81.

The first is performance appraisal, and it is exemplified in the removal of Harsh Vardhan as health minister. While no causes are ever given for ministerial reshuffles, it is no secret that Vardhan’s handling of Covid-19 has been inadequate.

Experts said this is likely the closest the Modi government will come to admitting it could have managed the pandemic better.

The second is the need to accommodate lateral entrants such as Jyotiraditya Scindia as well as leaders such as Sarbananda Sonawal who gave up regional leadership roles (the BJP retained Assam under Sonawal but decided to make Himanta Biswa Sarma the chief minister).

The third is the imperative to accommodate allies. The Modi council, before the reshuffle, had only one representative of another party – RPI’s Ramdas Athawale.

It now has four ministers from four allies (The Janata Dal (United), Lok Janshakti Party and Apna Dal are the new ones) which should go some way in blunting criticism that the BJP can’t work with allies or does not treat them well.

Four, the importance of looking ahead to coming assembly elections, especially in crucial states, and to facilitate leadership transitions in some states.

In Karnataka, for instance, it is widely known that the central leadership of the BJP would like the incumbent chief minister BS Yediyurappa, 78, to make way for someone else. Among the new ministers named is one of his closest aides Shobha Karandlaje.

And seven of the new ministers (including Anupriya Patel from Apna Dal) are from Uttar Pradesh, which goes to the polls in 2022, and which is the most important state in India from the perspective of parliamentary polls.

Five, the desire to reinforce the social engineering strategy of creating a Hindu bloc by consolidating Hindu voters across other backward classes (OBCs) and Scheduled Castes and Scheduled Tribes (SCs/STs). This has worked to the BJP’s advantage in many states.

Overall, this takes the total number of ministers from OBCs and SCs/STs in the 77-strong council to 47.

The Congress welcomed the new ministers but took a dig at the Prime Minister.

“Congratulations to the newly appointed ministers in the GoI. I am hopeful that the new cabinet will work with great integrity & honesty for the nation. I am optimistic that @PMOIndia will not wrest all the powers & ministers will be able to delegate their responsibilities freely,” said Mallikarjun Kharge, Leader of Opposition in the Rajya Sabha.

July 21 speech: Mamata Banerjee seeks to be heard beyond Bengal – Times of India