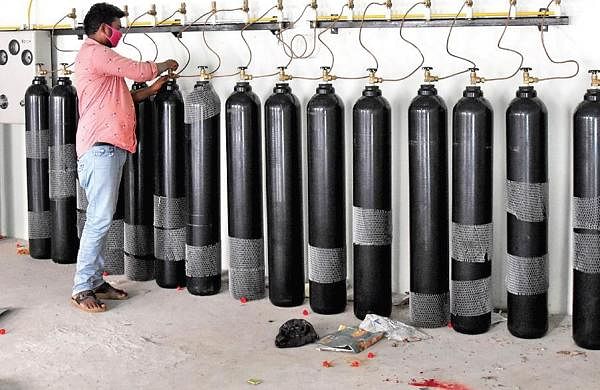 VIJAYAWADA: After Chief Minister YS Jagan Mohan Reddy wrote a letter to Prime Minister Narendra Modi seeking an increase in the allocation of medical oxygen, the Centre has taken steps for the supply of required oxygen to the State.The Centre has allocated additional three ISO containers and 110 MT of liquid oxygen from Reliance unit in Jamnagar to the state.An oxygen express left with oxygen containers from Jamnagar at 9 pm and will reach Concor Station in Guntur on Saturday night.

Principal Secretary (Transport) and Covid19 Task Force head MT Krishna Babu, who is monitoring the supply and storage of Oxygen, has said a train with two cryogenic containers, each carrying 20 MT of liquid oxygen, have started from Durgapur Steel plant and it will reach Krishnapatnam port in Nellore district by 4 pm on Saturday.

He said the Centre has also allocated another 3 ISO containers, which will be handed over to the State at Durgapur on Saturday afternoon. Another train with 60 MT of liquid oxygen will start from Durgapur on Saturday evening and reach Nellore within  24 hours.These two trains will be running in the opposite directions to ensure assured supply of 60 MT per day to the Rayalaseema districts and Nellore.

Elaborating further, Principal Secretary (Health) Anil Kumar Singhal said in the last 24 hours, 590 metric tonnes of oxygen was supplied to the government and private hospitals in the state. “After officials explained that oxygen supply to the state from Chennai will be hit for the next 5-6 days due to technical problems at the oxygen plant there, our officials alerted the Centre, which agreed to send 40 metric tonnes of oxygen from Durgapur in West Bengal and 110 metric tonnes from Jamnagar in Gujarat through rail route,” he said.

Another 80 metric tonnes from Jamshedpur will also be brought to the state in the next two days. In other words, a total 230 metric tonnes of oxygen will be supplied to the state from Northern states.  “The additional oxygen stock will help in catering to the needs of all hospitals in Andhra Pradesh and there will not be any delay in supply of oxygen with new tankers in place and at the same time, they will enhance oxygen storage capacity in the state,” he added.

Watch | What is medical oxygen? – The Hindu

Delhi’s oxygen crisis: Why it happened and how it was overcome – The Indian Express