Former England Test captain Michael Vaughan stirred another fresh debate when he claimed that Kane Williamson would outscore Virat Kohli and perform better in the English summer this year. He added that Williamson was as good a Test batsman and also suggested that Kohli hogged the limelight due to the cricket-crazy and fanatic Indian public.

Thus, in the second feature in our new series, CN Contrast, we compare King Kohli with the New Zealand great on various parameters in Test cricket including their performances in England.

WTC 2021: With No Bhuvneshwar India Has To Play Ishant Sharma As Third Choice Seamer In WTC Final

However, a closer look at their numbers suggests that Kohli’s runs have come against tougher and higher quality oppositions whereas Williamson has benefitted from massacring the weaker teams! Both Kohli and Williamson have excellent records at home so the real comparison will be seen in testing conditions away from home. The biggest measurement of greatness for Kohli is his performance in SENA countries – the yardstick for all sub-continental batsmen. The Indian batsman has a fine overall record in these 4 countries with an aggregate of 2889 runs in 32 Tests at an average of 46.59 with 11 hundreds.

Kohli has a batting average of in excess of 50 in Australia and South Africa – he has scored 1352 runs in 13 matches Down Under at an average of 54.08 with 6 hundreds and 558 runs in 5 Tests in South Africa at an average of 55.8 with two hundreds. Although he failed in England in 2014, he more than adequately made up for it by blasting 593 runs in the five-match series in 2018 which included two centuries.

His worst record is in New Zealand where he has failed in 5 of the 8 innings he has batted though he did register a counter-attacking and match-saving 105 off 135 deliveries in the second Test at the treacherous Basin Reserve in 2014.

On the other hand a closer look at Williamson’s numbers indicate that he has struggled against the top Test teams away from home and scored heavily against the weaker oppositions. Williamson has scored just 461 runs in 7 Tests in India – a benchmark for batsmen from SENA countries at an average of 35.46 with just one hundred and three fifties. He has failed in 8 of the 13 innings he has batted in the country. It has been a downhill curve for Williamson post his magnificent hundred on debut in Ahmedabad in 2010.

While overseas batsmen from SENA are expected to struggle in the heat, humidity and against the high quality spin in India, what is surprising are the New Zealand greats numbers in South Africa and England. Williamson has scored 247 runs in 4 Tests in the Old Blighty at an average of 30.87 registering one hundred and a fifty. He has failed in 6 of the 8 innings in the country which is a much higher Failure Rate than Kohli’s in England (12 innings out of 20).

Also while Kohli’s match aggregate of 200 runs (97 and 103) led India to a win in Nottingham in 2018, New Zealand suffered a massive defeat at Lord’s in 2015 when Williamson registered his only ton in the country.

There Seems to be No Respect for Coaches, Knew WV Raman’s Days Were Numbered: Ex-coach Purnima Rau

Williamson has also mustered just 127 runs in 7 innings in South Africa at a paltry average of 21.16.

Overall, he has an aggregate of just 1392 runs in 22 matches at an average of 34.8 with 4 hundreds in as many as 42 innings in the four toughest away venues he has played in – India, Australia, South Africa and England – failing in three of them. 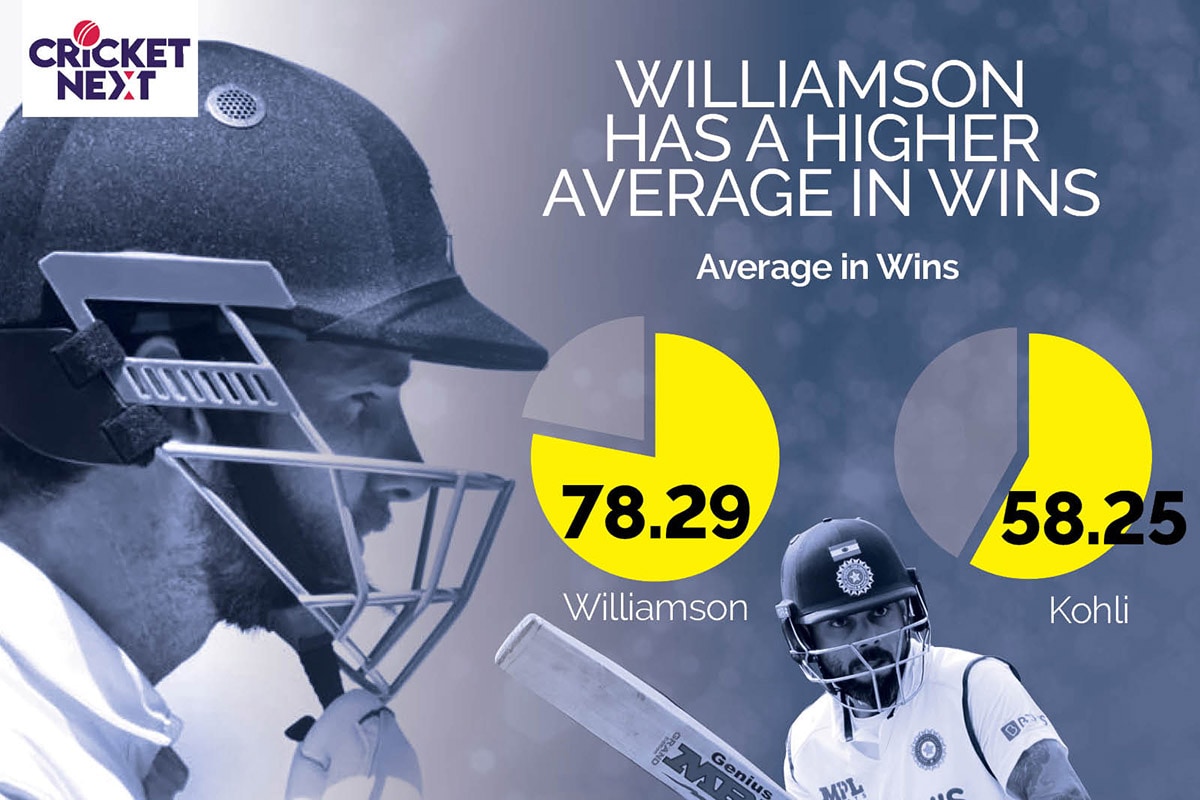 There is one parameter where the New Zealand captain outsmarts his Indian rival – and that is the contribution in wins for the country.

Williamson has scored 3993 runs in 36 victorious Tests for New Zealand at an average of 78.29. 15 of his career 24 hundreds (62.5%) have come when his side have ended up winning the match. His batting average in wins (min. runs 2000) is the third-best in Test history after Don Bradman and Steve Smith. This highlights the role played by Williamson for his country. He is not only their talisman with the bat but also their only world class player in the format.

Kohli, on the other hand, is part of a world beating Indian batting line-up with the likes of Pujara, Rahane and now Rohit Sharma also scoring heavily and producing match-winning knocks for the country. As such, his impact is shared with these fine Test batsmen and thus Kohli has an average of 58.25 in wins for India with 13 of his 27 hundreds (48.15%) contributing to an Indian win.

This basically suggests that one would choose Kohli to set up a match but Williamson might be a better bet to save a Test or bat out overs and time in the second innings.

KOHLI DOMINATED WILLIAMSON IN THEIR PERIOD OF DOMINATION 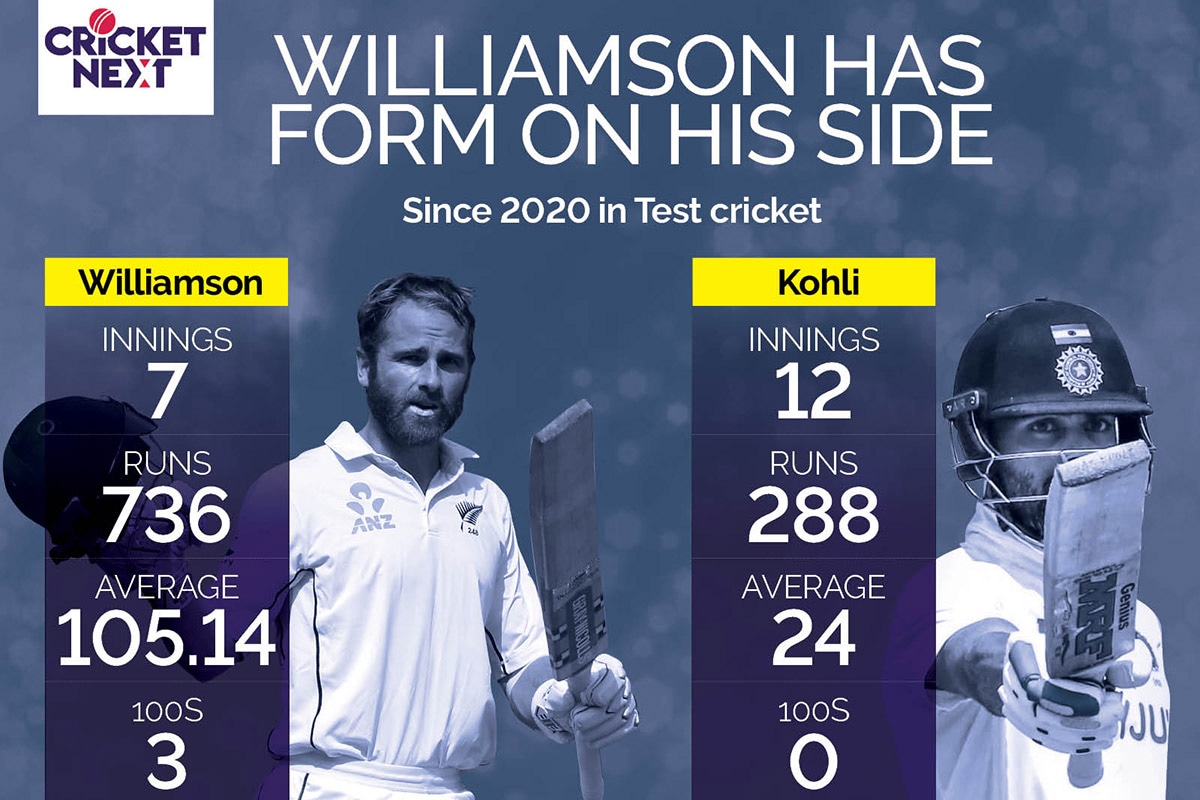 Both Kohli and Williamson dominated Test cricket (along with Steve Smith) between 2016 and 2019. However, the Indian captain was more ruthless with a bigger appetite for runs than his New Zealand counterpart in this period.

Kohli scored 4208 runs in 43 Tests at a stunning average of 66.79 with 16 hundreds in this time-frame. His batting average was second only to Smith in this period. Williamson aggregated 2484 runs in 32 Tests at an average of 54 with 8 hundreds during this period – fine numbers themselves but substantially lower than Kohli’s.

However, while Williamson has continued on his merry ways and scored 736 runs in 7 innings at an average of 105.14 with three hundreds since 2020, Kohli has witnessed a massive dip in form and notched up just 288 runs in 7 Tests (12 innings) at an average of 24 with no hundreds and only three fifties in the same time-frame.

Kohli has scored runs against the best attacks in tough away conditions whereas Williamson has struggled in a majority of the most challenging overseas conditions for New Zealand. The Indian captain was also more dominant and ruthless in the period both were at their best in Test cricket. However, Williamson tends to contribute more in wins for his country and has a better record in the second innings which suggests that he can adapt himself to the wear and tear of pitches better than Kohli.

The New Zealand captain is also in the form of his life while the Indian skipper is going through his most difficult phase in Test cricket.

But giving more weightage to conditions and overseas numbers, the Indian captain may still outperform his New Zealand rival and make the English Summer of ’21 his own!

Get all the IPL news and Cricket Score here

WTC final will be a test of Virat Kohli and Kane Williamson’s captaincy skills, says Mike Hesson – Times of India

Heavy Metal Football: The Euro could be splendid in its unpredictability but a tough tournament than the World Cup – The Financial Express