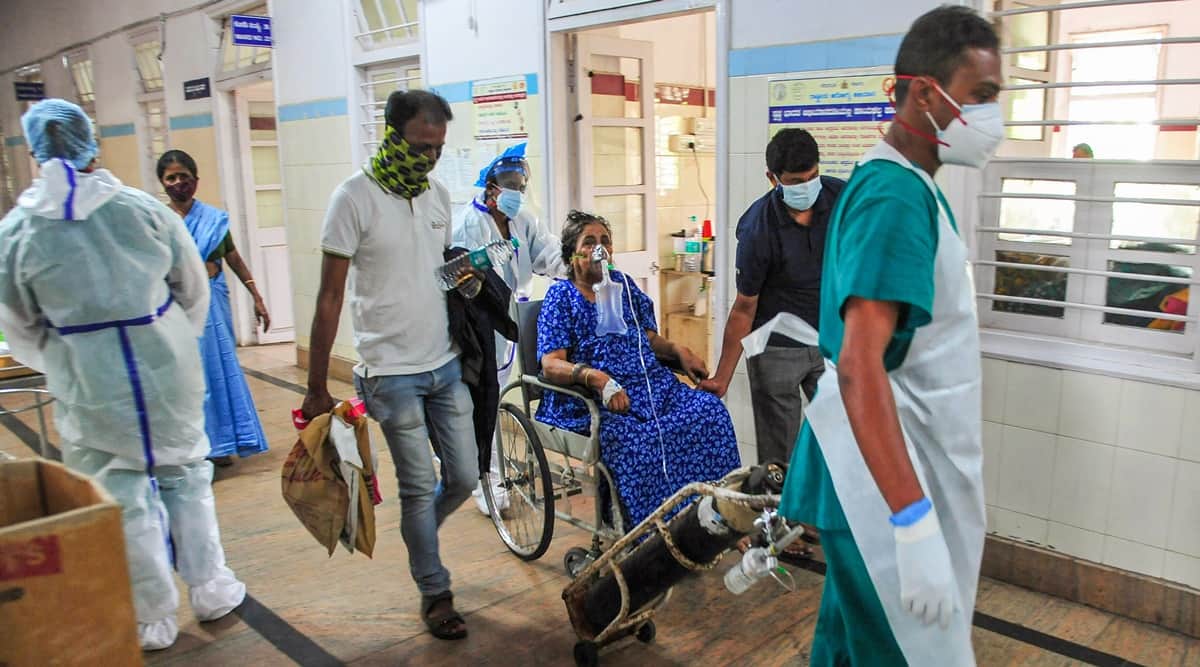 A COVID-19 patient on oxygen support at a hospital, during the second wave of the coronavirus pandemic in Bengaluru. (PTI)

A total of 2.61 crore samples have been tested so far, out of which 1,49,090 tests done on Monday, the bulletin said. The number of those who had taken the first and second doses of the COVID-19 vaccine now stood at 98.78 lakh, it said. (PTI)

The Bengaluru Metro Rail Corporation Limited (BMRCL) Tuesday announced that a 100-bed Covid Care Centre will be set up at Hotel Eka, Kudlu Gate (with medical care by Jaishree Multi-Specialty Hospital Hosur Road), in a bid to help its employees, construction workers infected by Covid-19.

“Arrangements for good hygiene and for a nutritious diet to the inmates, have been made. This CCC will provide care for Covid19 Positive asymptomatic and mild symptomatic BMRCL employees and construction workers and the isolation facility to combat the spread of the pandemic,” an official statement read.

Further, according to BMRCL Chief PRO B L Yashwanth Chavan, the CCC will be equipped with oxygen concentrators and oxygen cylinders to facilitate immediate care for the patients when required. “BMRCL has tied up with nearby hospitals to shift the patients if they require critical care. We had taken a similar initiative last year from July to October 2020,” he added.

The Karnataka government has decided to promote first-year pre-university (I PU) students to higher classes. “A bridge course will be planned (for them) during the commencement of the new academic year,” Primary and Secondary Education Minister S Suresh Kumar clarified.

He also added that all PU will be allowed to work from home, except those on Covid duty. “Lecturers working from home should be in touch with the students to monitor their learning progress incessantly. Those who are on Covid duty will continue to work so,” the Minister added.

However, the government is yet to announce any change to the SSLC (class 10) exams scheduled to be held from June 21 to July 5. Earlier, Kumar had announced that a continuous and comprehensive evaluation programme will be the deciding factor for the promotion of students from classes 1 to 9.

A day after 23 people died allegedly due to oxygen shortage in Karnataka’s Chamarajanagar district hospital, the district sessions court Judge Sadashiva S. Sultanpuri visited the hospital to take stock of the situation.

The Judge visited the hospital and also spoke to the Chamarajanagar district commissioner MR Ravi and reviewed the situation at the hospital premises before Health Minister Dr K Sudhakar arrived at the hospital, according to sources in the district administration.

While the families of the patients have alleged they died because of a shortage of medical oxygen at the facility, the state government has claimed only three of the deaths occurred due to this reason.

The Karnataka government Tuesday decided to postpone second-year Pre-University (II PU) board examinations in the wake of the ongoing second wave of the coronavirus pandemic.

‘New dates will be announced well in advance,’ Primary and Secondary Education Minister S Suresh Kumar announced. He also appealed to the students to continue with their preparations ‘without getting disheartened.’

Karnataka Chief Minister B S Yediyurappa Tuesday met Health Minister K Sudhakar, Additional Chief Secretary (Health) Jawaid Akhtar and other officials to review the availability of Remdisivr in Bengaluru and across the state. According to officials, the facility with first 20 beds will be operational on May 6 with oxygen concentrators only. “Once oxygen availability is ensured by the State Government, the remaining 80 beds are expected to be operational by May 20 May. Of the total 100 beds, there will be 10 ICU beds and 40 beds with piped oxygen. Balance 50 beds will have oxygen concentrators,” the Defence PRO stated.

The facility is expected to be manned by Specialists, Doctors, Nurses and Paramedical staff provided by the Command Hospital Air Force, Bengaluru. Admission to the facility will be coordinated by BBMP/ Govt of Karnataka through a nodal officer. “Govt of Karnataka has assured necessary support for Pharmacy, Oxygen and Security,” the official added.

Community vaccination camps held at apartment complexes in Bengaluru have been paused temporarily due to the shortfall of stocks in vaccines across the state.

“On the vaccination front, it is expected that the current shortfall of stocks would be replenished by mid-May. Hence the availability of vaccines for the 18+ (age) category is only expected to kick-in by then,” a communication from the Bangalore Apartments’ Federation (BAF) on Tuesday mentioned.

However, it clarified that people in the 45+ age category, who have scheduled to take their second jabs, would get the same only after confirming online bookings. “Walk-ins will not be supported. On account of this BAF would temporarily pause the community vaccination camps previously being facilitated. We will resume the same when clarity on vaccine supplies emerges,” the clarification added.

After the Chamarajanagar incident, two people allegedly died on Tuesday in the wee hours due to oxygen scarcity in Kalaburagi district in North Karnataka.

According to sources in the Health Department, two COVID-19 patients, a man and a woman, died at Anand Hospital in Kalaburagi due to oxygen shortage.

A banner displayed on behalf of a local BJP leader near a crematorium in Bengaluru where Covid-19 victims were taken for their final rites drew criticism after a photograph of the same went viral.

The hoarding claimed that free food and refreshments were arranged for people attending funerals at the Giddenahalli crematorium “under the guidance of Yelahanka MLA S R Vishwanath.” The flex board also featured mugshots of Prime Minister Narendra Modi, Chief Minister B S Yediyurappa, and Revenue Minister R Ashoka apart from Vishwanath and a couple of local leaders.

A few locals in the area garlanded the board with chappals and other footwear in protest of the action.

“Increasing number of covid patients requiring hospitalization and oxygen support has made it an immediate necessity for BBMP to procure various Healthcare facilities that are vital for or survival of covid patients. The facilities to be procured by the BBMP include oxygen cylinder oxygen concentrators and niv ventilators. These equipment are to be used in the covid stabilisation centres proposed by the BBMP,” BBMP Commissioner said in a statement.

“The portal will provide the number of Covid patients admitted to private hospitals under private quota, bed availability, contact number and information of hospitals. The data will be uploaded in real-time,” BBMP said in a statement.

The Central Bed Management System has 11,000 beds in both government and private hospitals in BBMP Limits and for the past five days, about 5,013 beds have been allocated through the system.

The Karnataka government has appointed a nodal officer to ensure children orphaned due to the ongoing Covid-19 situation in the state are provided with all necessary facilities and support.

As per an order issued by N Manjunatha Prasad, member secretary of the state executive committee, Inspector General of Registration and Commissioner of Stamps K P Mohan Raj has been appointed as the nodal ffficer to identify such children. The officer is also directed to ensure long-term arrangements are made to take care of such children.

Earlier this month, several child helplines and NGOs had reported that a number of cases where children lost both parents to Covid-19 were reported from across the state, urging the government to take measures for the care of such children.

Chief Minister B.S. Yediyurappa has convened a special cabinet meeting at 4 pm on Tuesday with the COVID-19 pandemic crisis increasing in the State during the ongoing 14-day lockdown.

In the wake of a severe shortage of oxygen supply reported in hospitals with a high COVID-19 caseload, Karnataka CM B S Yediyurappa Monday decided to ramp up the supply of oxygen across the state after meeting oxygen manufacturers and suppliers.

During the meeting held at his official residence in Bengaluru, he directed officials to to ensure that there is no reduction in quantity of oxygen supplied to the state from the allocation announced by the Centre. “We should also reduce the time taken to re-fill oxygen tankers and ‘green corridors’ should be created for faster commute of oxygen tankers,” the CM noted.

Further, he told officials that unnecessary delay at toll gates should not be allowed and that nitrogen and argon tankers available should be converted to ensure oxygen supply.

“Oxygen manufacturers and suppliers should resolve all issues by approaching the officials linked to the process directly, and the services of LPG tanker drivers should also be utilised in case of emergency,” Yediyurappa added.

After an increase in the number of COVID-19 cases, the Kodagu district administration has decided to tighten the close down, with essential and other permitted shops remaining open only on Tuesdays and Fridays.

A decision was announced by Kodagu DC Charulata Somal on Monday.

“All essential shops, agriculture shops, liquor shops and take-away facilities at hotels are permitted to function only between 6 am and 12 noon on Tuesdays and Fridays. This will be imposed with immediate effect for the coming two weeks,”  Charulata said.

In a week, Kodagu district’s positivity rate spiked to 27.4% — the highest in the state.

With the surge of Covid-19 cases and the demand for hospital beds on the rise in Bengaluru, local civic body BBMP has formed a panel of three nodal officers to ensure better functioning of the Central Hospital Bed Management System (CHBMS) developed for patients in Bengaluru Urban district.

The committee, as per the order issued by Chief Commissioner Gaurav Gupta, will study the existing practice of bed allotment and suggest ways to make it “transparent and robust.”

“Simultaneous remedial action will be taken to rectify defects if any, and a report will be undersigned  (by the committee) to be submitted within 24 hours,” the order dated May 3, 2021 read.

Among the 239 deaths reported on Monday, Bengaluru Urban accounted for 115, while 19 were from Chamarajanagar, 14 in Mysuru, 14 each in Ballari and Hassan, eight in Tumakuru, seven in Shivamogga and five each in Bagalkote, Chikkaballapura and Kalaburagi.

A total of 2.61 crore samples have been tested so far, out of which 1,49,090 tests done on Monday, the bulletin said. The number of those who had taken the first and second doses of the COVID-19 vaccine now stood at 98.78 lakh, it said. (PTI)

Good morning!
Welcome to the live blog from Bengaluru where we bring to you the latest updates on COVID-19 vaccination drive, COVID-19, lockdown 6.0, unlock phase 6, BBMP and more across Bengaluru and Karnataka. Follow the blog to stay up to date with the state in real time.

Twenty-three patients have died at a Covid-19 treatment facility in Karnataka’s Chamarajanagar district in a 24-hour period from Sunday morning. While the families of the patients have alleged they died because of a shortage of medical oxygen at the facility, the state government has claimed only three of the deaths occurred due to this reason.

Chief Minister B S Yediyurappa on Monday reconstituted the Covid-19 task force to examine measures taken to curb the pandemic and create awareness among the public on its management. The four-member task force will be headed by Deputy Chief Minister Dr C N Ashwath Narayan.

Here are a few contacts that might come in handy for you in emergency situations:

'I was nervous before meeting them': RCB batsman calls himself lucky to have played with de Villiers and Virat Kohli - Hindustan Times

Coronavirus shutdowns will save people but hunger will kill them: Saamana