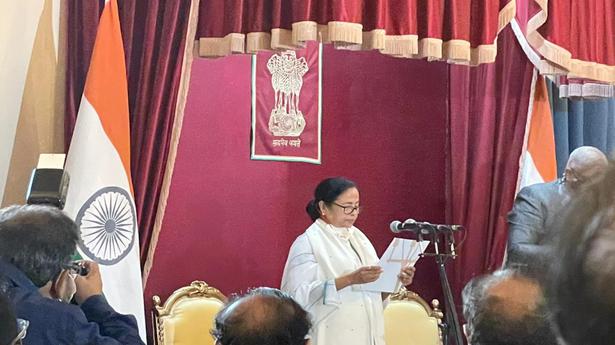 My first priority will be to contain COVID-19 crisis, the Trinamool supremo says.

Trinamool Congress chairperson Mamata Banerjee was on Wednesday sworn in as West Bengal Chief Minister for the third time in a row. She was administered the oath of office by Governor Jagdeep Dhankhar.

The Trinamool Congress won 213 seats in the 294-member Assembly in the recent polls. The party’s vote share was at an all-time high of 47.9 %. The elected TMC legislators unanimously elected Ms. Banerjee as their leader on May 3.

“I want to thank all the people of the State, ‘Maa, Maati Manus’, of West Bengal. There were many in the country and across the world whose eyes were on the State,” she said after being sworn in as Chief Minister.

The event, which was conducted at 10.45 a.m., was brief, keeping in mind the pandemic restrictions. Only 50 guests were allowed and no Minister was sworn in. The guest list comprised key Trinamool Congress leaders, including MP Abhishek Banerjee, and poll strategist Prashant Kishore. Former Assembly Speaker Biman Banerjee, TMC secretary general Partha Chatterjee and senior leaders such as Subrata Mukherjee and Saugata Roy were present.

State BJP president Dilip Ghosh did not participate in the event in protest against the post election violence on party supporters.

Also read: This is victory of Bengal and only Bengal can do it: Mamata Banerjee

Soon after the swearing-in ceremony, Ms Banerjee appealed to all parties to maintain peace and stop post election violence. “I will appeal to all political parties to maintain peace. Take proper care that there is no violence. West Bengal does not like violence, and I do not support it,” she stated. For three months, the administration was working as per the instructions of the Election Commission of India and some inefficiency had crept in.

Mr. Dhankhar expressed the hope that the governance in the State “will be according to Constitution and as per rule of law”. Describing the Chief Minister as his younger sister, he said that it was not very often that one got elected as Chief Minister three times in a row. “There are occasions when State faces the crisis and we have to above partisan interest, we have to reach at a level governance reaches the expectations as per our preamble,” he stated.

Mr Dhankhar said the biggest task at hand was to “end senseless and horrendous post poll violence, if it is retributive is antithetical to democracy”. He added that he was hopeful that the Chief Minister would take steps to “assure that those who are hurt [in violence] relief is reached out an urgent basis”. He also advised Ms. Banerjee to heed to the principles of “cooperative federalism”

After the swearing-in ceremony the Chief Minister arrived at State Secretariat “ Nabanna Building”, where the personnel of the Kolkata Police and State police accorded her guard of honour.

Ms Banerjee announced a number of restrictions in view of the pandemic and also made some important bureaucratic reshuffle.

10 yrs ago, Modi as CM had flagged UPA threat; federal shoe now on the other foot – The Indian Express

I grieve with them, says PM Modi as he condoles Covid-19 deaths – Hindustan Times