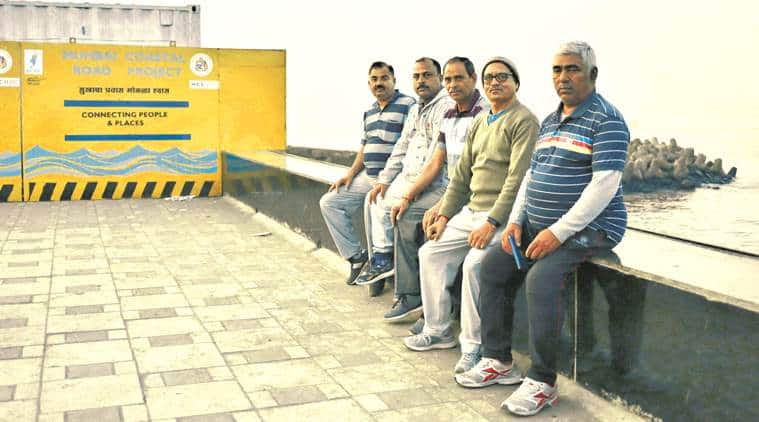 A barricade blocks the promenade, which is popular with walkers, runners and tourists. (Express photo: Nirmal Harindran)

At 5.30 every morning, Rakesh Pande (38) is at the Worli Sea Face with his running shoes on. Like many others on the promenade every day, the run on the 2.4-km stretch from Worli Dairy to Worli Koliwada has been a part of his life since childhood, said Pande, a resident of the Mahalaxmi Housing Society near Century Mills in Worli.

But in December, he, like many walkers, runners and tourists visiting the promenade for an unhindered view of the sea, saw yellow barricades “gobbling up” the promenade for the construction of Mumbai’s ambitious coastal road project. “In this city, after Marine Drive. the Worli Sea Face is a landmark because of its beautiful promenade. I have been visiting the Worli Sea Face daily for many years. We have a group of five to six persons, all from Worli. Imagine such a long promenade in a city like Mumbai where open space is a big problem. We don’t have enough space and the city is congested. Due to the coastal road project, this open space will also be taken over,” said Pande.

“I don’t know exactly how they are going to progress but if it is done like the current barricading at Worli Dairy, then the Worli promenade will also become history,” he added.

For Pande, 2019 may well be the year when he will have to change his morning walk route, but he thinks that the promenade will return to its old faithful after being off limits in the interim for a greater good.

“The work of the coastal road project should go ahead as the city’s traffic is choking. But my only worry is that in 2019, we might lose our sea face. My parents used to take me for a walk here when I was little. I heard that after the work is completed, the promenade will be restored but the question is when?” Pande said.

He, however, harbours no illusion. Pande knows that it may be a while before he can run on the promenade again.

“Going by the track record of our ongoing projects in which municipal or government authorities often miss deadlines, I have my doubts about being able to see the promenade again in its normal shape.”

Karnataka lockdown after June 7: Who said what – Deccan Herald

UNICEF supports 26 oxygen plants and sends over 4,000 oxygen concentrators, and other critical supplies as India continues to grapple with COVID-19 – UNICEF