“We believe that Build 19043.928 is the final build for the May 2021 Update,” says Microsoft’s Brandon LeBlanc. This build is now available for Windows Insider beta testers to download.

The moniker makes it obvious that the Windows 10 update will arrive in May, but an exact date has not yet been announced. Some postulate that it will come with the May 11 Patch Tuesday, Microsoft’s monthly interim OS update. The company has already announced that the update will be delivered using the same “optimized way using servicing technology” that the monthly updates use. LeBlanc also notes that “Windows Insider Program for Business participants have been able to validate 21H1 on commercial devices in their organizations since March.” 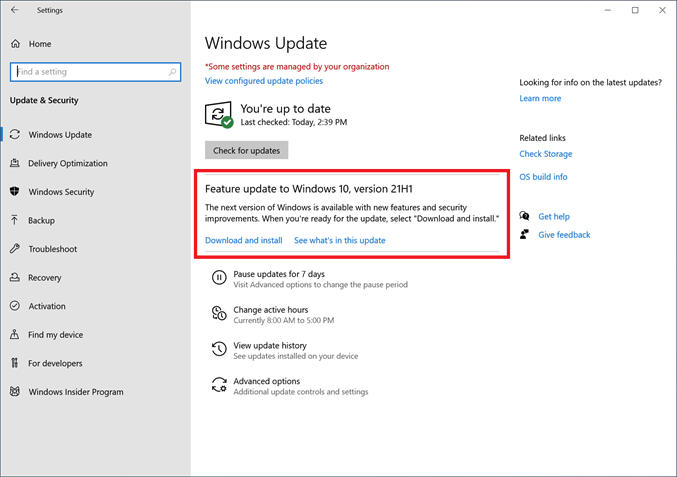 In spite of the naming fanfare, the new Windows version is devoid of flashy new features. It’s basically a tightening-up update, meaning it delivers performance, compatibility, and security improvements. The only explicitly new features are the ability to choose whether you want to use a built-in webcam or an add-on one for Windows Hello face authentication; performance boosts for the Windows Defender Application Guard security feature; and performance improvements to group policy services for remote work.

The rollout comes as Microsoft CEO Satya Nadella announced that Windows 10 is now running on 1.3 billion active devices. Though this stat didn’t appear in Microsoft’s official Q3 earnings report, Nadella made note of it in his remarks during the earnings call.

“People are turning to Windows PCs more than ever to stay connected, productive, and secure. Windows 10 now has more than 1.3 billion monthly active devices,” he said. That’s a huge gain from March 2020, when users topped 1 billion. (Thanks to ZDNet’s Mary Jo Foley for pointing me to the earnings call transcript.)

News and Interests is a widget that pops up from an icon in the taskbar. It can show customizable content like local weather, news, stocks, and sports info in a pleasing presentation. This feature is rolling out separately and works on “Devices running Windows 10, version 1909 (and later) who have installed the May 2021 Windows monthly update (or later) will be included in this phased rollout,” according to a Microsoft support Page.

For more groundbreaking Windows releases, we can look ahead to an interface redesign in the 21H2 release, dubbed Sun Valley, which features rounded windows, a redesigned Start menu, a new app store and updated taskbar icons. Beyond that, there’s Windows 10X, which will be a simplified flavor of Windows intended to go head-to-head with Google’s Chrome OS, which has largely taken over the education PC market.

Windows 10 May 2021 update: Release date, new features, how to download and more – CNET

How to speed up your Wi-Fi connection on a Windows PC: A step-by-step guide – The Indian Express

The Windows 21H1 update, and why I won’t miss Windows 10X – Computerworld