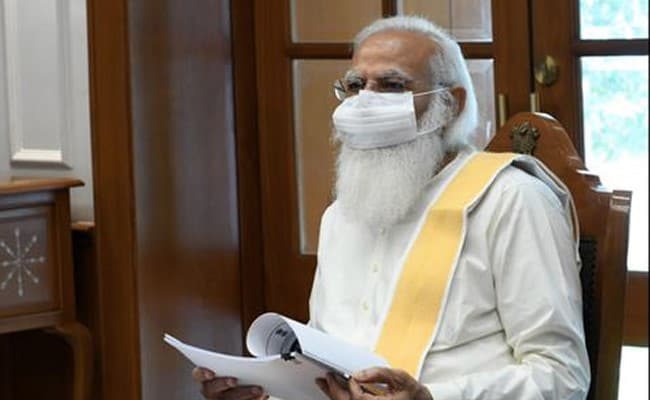 PM Modi made several remarks on Friday on the Covid situation in India. (File)

Prime Minister Narendra Modi is holding a high-level meeting to review India’s coronavirus situation and the vaccination drive in the country. The meeting began at around 11 am.

Amid criticism by opposition leaders over handling of the second wave of Covid, which has overwhelmed hospitals across the country, the Prime Minister on Friday said: “The pandemic, the worst in 100 years, is testing the world at every step. There is an invisible enemy before us.”

“The pain that citizens have suffered, that many experienced, I am feeling it equally,” PM Modi said while addressing an online event. He will also hold a meeting with officials of the worst-hit districts on Tuesday and Thursday.

India has been logging over three lakh Covid cases every day for nearly three weeks; the alarming surge has raised global concerns. The overall case count rose to 2.43 crore cases with 3.26 lakh cases recorded in the last 24 hours, the Health Ministry data this morning showed.

Shortage of medical oxygen, which has been linked to deaths of patients in several parts of the country, has emerged as one of the biggest challenge. Desperate pleas for hospital beds and medicines have been flooding social media.

While experts have said the country has to focus on stepping up vaccination drive, many states have been red-flagging shortage of doses. On Thursday, the government said about 200 crore Covid shots are expected to be available by end of this year.

“So far, around 18 crore vaccine doses have been given. Government hospitals are giving free shots across the country. So please do get the vaccine when it is your turn,” the Prime Minister urged on Friday.

Earlier this week, 12 major opposition parties wrote to him, demanding that the centre take immediate action to tackle the second wave. Distribution of free vaccines, a stop to the work on the Central Vista project and a repeal of farm laws were among a series of measures suggested in the letter.

“We have repeatedly in the past drawn your attention, independently and jointly, to the various measures that are absolutely imperative for the Central government to undertake and implement. Unfortunately, your government has either ignored or refused all these suggestions. This only compounded the situation to reach such an apocalyptic human tragedy,” the letter read.