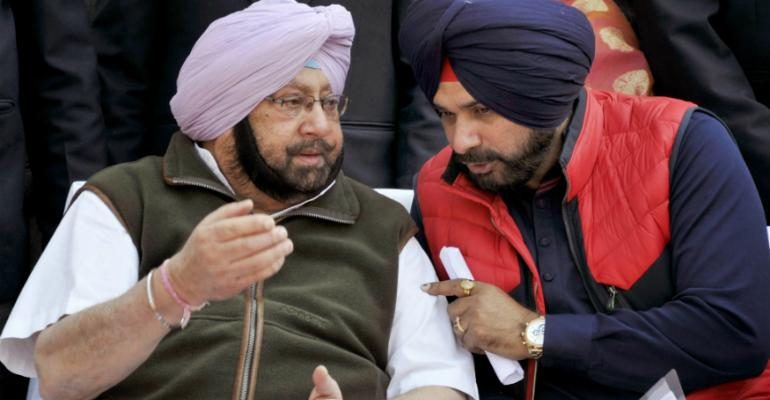 Chandigarh: Theoretically, Punjab, which is in the midst of anti-farm-law protests against the Bharatiya Janata Party government at the Centre, is the Congress party’s best bet for a victory in the state elections slated for early next year. Five states will go to the polls at that time: Punjab, Uttar Pradesh, Goa, Manipur and Uttarakhand.

But realistically, as political analyst Pramod Kumar told The Wire, the party that had won the Punjab assembly polls convincingly in 2017 is in self-destructive mode at this time, making its chances at next year’s polls shaky.

As the state battles the second wave of the pandemic, topping the country’s COVID-19 mortality rate, camps within the Congress are involved in a full-fledged war, making accusations against each other in public and weakening the party’s poll prospects.

The conflict within the party involves Punjab chief minister Captain Amarinder Singh and cricketer-turned-politician Navjot Singh Sidhu. Their bickering started two years ago after the Lok Sabha elections in 2019, when Amarinder Singh stripped Sidhu of his local government portfolio, blaming him for the party’s poor performance in the urban constituencies that had been directly under his ministry. When Amarinder later offered Sidhu the power ministry, the offer was rejected and Sidhu began to question the chief minister’s leadership style.

Last year, after the intervention of Rahul Gandhi and Priyanka Gandhi Vadra, Harish Rawat, former chief minister of Uttarakhand and the person in charge of the Congress party’s Punjab affairs, attempted a truce between the two leaders. But the talks failed when Sidhu demanded to be elevated to the post of Punjab Congress chief and Amarinder Singh stated that there were many more deserving candidates for the post.

Since last month, when the Punjab and Haryana high court quashed the probe reports submitted by the state government’s special investigation team (SIT) into a police firing case in Kotkapura town five years ago, Sidhu’s questioning of Amarinder Singh’s leadership has become even more vociferous. Several members of the cabinet have also turned against Amarinder.

The case goes back to October 14, 2015, when the state police, then under the Shiromani Akali Dal-BJP government, opened fire on a crowd in Bargari village who had been protesting incidents of ‘sacrilege’. Since June 1 that year in different parts of the state, copies of the Guru Granth Sahib, the holy scripture of the Sikhs, had had pages ripped out and strewn around. On October 12, when the same thing happened at Bargari, the villagers protested. By October 14, the protest had grown so large that the state police fired upon it and killed two people.

No one could have anticipated then that these ‘sacrileges’ would shake the state’s politics and give the ruling Shiromani Akali Dal (SAD) its worst ever electoral defeat in the 2017 assembly polls. The same polls gave the Congress a nearly two-thirds majority when Captain Amarinder Singh promised to put behind bars all those responsible for the incident, including Akali leaders.

Consequent to the order of the Punjab and Haryana high court on April 10, the Amarinder Singh government constituted a new three-member SIT on May 8 and directed it to complete the investigations into the Kotkapura firing incident within six months as per the court’s orders.

But the damage had already been done. The chief minister not only faced criticism from the opposition over the delay in justice in the sacrilege case, but was also put at a disadvantage within his own party. Sidhu turned up the heat against the captain and so did Amarinder Singh’s bête noire, the Punjab Congress’s Rajya Sabha MP Partap Singh Bajwa.

Matters worsened on May 15 when, as Sidhu continued to criticise Amarinder on social media, a vigilance inquiry against Sidhu and his aides was fast tracked. This inquiry against Sidhu had begun in 2019 for the allegedly shoddy deals he had made during his term as local bodies minister between 2017 and 2019.

Two days later, on May 17, the Punjab State Commission for Women issued a notice to the chief secretary of Punjab seeking a status report within a week of a two-and-a-half year old case involving Channi, in which a woman IAS officer was allegedly harassed.

The crisis in the party deepened even further a few days ago when Pargat Singh, the MLA from Jalandhar and Sidhu’s close aide, held a media conference in which he alleged that Sandeep Sandhu, the chief minister’s political secretary, had threatened him with a police case for raising his voice against the CM on the issue of the sacrilege case.

Since then, barbs from both camps within the party have been flying back and forth in public, something the party had not expected after its splendid performance in this February’s municipal polls.

In a tweet on May 19, Sidhu said that under the Amarinder government, there was no action on drugs, no action on sacrilege, no white paper on the power purchase agreement and no action on the mafia raj.

“His only action was against his party colleagues to protect the Badals and Majithia,” Sidhu said, alleging that the CM had not acted on the critical matters of corruption and sacrilege in order to protect the SAD president Sukhbir Singh Badal and his brother-in-law Bikramjeet Singh Majithia.

Partap Bajwa also attacked Amarinder, saying that the actions against Sidhu and Pargat had been ill-advised and it would have been better if the vigilance department had investigated the Badals for their acts of omission and commission. Jail minister Sukhjinder Singh Randhawa backed Sidhu as well, calling the vigilance bureau “a caged parrot misused by successive governments”.

Senior journalist Hamir Singh told The Wire that the present crisis within the Congress is the manifestation of a longstanding internal power struggle. While Captain Amarinder Singh is the Congress party’s supreme leader in Punjab, Navjot Singh Sidhu has long wanted to be the chief minister of Punjab.

In fact, said Hamir, Sidhu had not joined the Aam Aadmi Party after he broke ties with the BJP in 2017 because Arvind Kejriwal had not promised him the chief minister’s post.

“Upon joining the Congress, Sidhu tried to become deputy chief minister and later the Punjab Congress chief as well, but the captain did not let him succeed,” Hamir explained. “By raising the emotive sacrilege issue on which Amarinder Singh’s government is currently at a disadvantage, Sidhu may be thinking of replacing the captain as the leader of the Congress. But it is not as easy as it sounds.”

Sidhu does not have wide acceptability amongst the old guard of Congress leaders. This means they may not endorse him for the CM post if situation reaches that stage. “Bajwa and Randhawa may be seen with Sidhu right now, but they have their own plans to gain something from it,” Hamir said.

The Congress’s present crisis in Punjab reflects the divisions within the party at the central level, Hamir added. The popularity of the Gandhi family within the party has lessened even more after the latest poll debacles in West Bengal and elsewhere.

Hamir said that if the crisis in the Punjab Congress remains uncontrolled for a few more months, it will seriously damage the party’s poll prospects. The party cadre will be demotivated and voters will believe that something is seriously wrong with the party if its own leaders raise issues that opposition parties tend to raise.

“It would be better if the Congress entered the next assembly election in Punjab with a united face, given that there is still a political vacuum in the state,” Hamir said. “The Akalis have not emerged properly as yet. The AAP is struggling to find a credible face. The BJP is still a non-player due to its controversial farm bills.”

Also read: Waiting for Lovepreet, the Young Man Who Likes to Feed People

While Hamir believes that the Punjab Congress’s current crisis is due to the ambition of Sidhu, Ashutosh Kumar, political science professor at Panjab University, told The Wire that the sacrilege case is the real problem for the party in Punjab.

“Barring Sidhu who is ambitious and thinks highly of himself, all the other Congress leaders are critical of Amarinder Singh because they are worried about their political future,” Kumar said. “They fear that they might lose the election due to the party’s mishandling of the sacrilege issue.”

Leaders like Randhawa come from constituencies with a dominant Sikh population who are very touchy about religious matters, Kumar explained. “That is why Congress leaders are after Amarinder Singh to take the sacrilege issue to its logical conclusion before the state assembly polls next year. They believe that the case will emerge as a key election issue again and the Congress may be on the wrong side of it if the probe remains inconclusive,” he said, adding: “In such a scenario, one never knows who will benefit. Since the Akalis are still facing their own problems, the AAP is an open force, although they have a leadership crisis as well.”

According to Kumar, one of the weaknesses of the Amarinder Singh government in the last four and half years was that it left governance to the bureaucracy, which annoyed a lot of Congress leaders.

If media reports are to be believed, Rahul Gandhi will meet his party’s ministers and MLAs in Punjab in the next couple of days to address their grievances. Reports also suggest that Priyanka Gandhi Vadra has talked to Captain Amarinder Singh.

In a tweet on May 20, Sidhu asked Congress party MLAs to go to Delhi and speak the truth of Punjab to the Congress high command.

A close aide of Harish Rawat said that Rawat is in touch with the party leaders in Punjab and is trying to defuse the situation.

While the outcome of these meetings is so far uncertain, many people believe that the conflict within the party over the sacrilege issue may not be easily assuaged unless the Amarinder Singh government fixes accountability for its mishandling of the probe and gives the public confidence that it is serious about the matter.

Vivek Gupta is a Chandigarh-based reporter who has worked for several news outlets including The Hindustan Times, The Indian Express and The Tribune.

Mamata picks Abhishek for gen secy, is effective No. 2 in Trinamool – The Indian Express

Narendra Modi speech highlights: PM announces free vaccine for all 18+, Oppn says ‘thanks for acceding to our request’ – The Indian Express