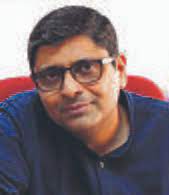 Amidst depressing stories of Covid corpses on the Ganga, the near-fatal collapse of the Congress party in the just-concluded Assembly polls was largely overlooked, as was interim Congress president Sonia Gandhi’s decision to postpone organisational elections. In short, the Congress organisation is like one of those Covid patients in Uttar Pradesh with no hope of testing, treatment or even a decent funeral.

The Congress can revive the practice of annual sessions or modify it to have biannual sessions, inviting mass leaders from across the country to preside over those meetings.

This crisis or organisational paralysis, primarily, is over the issue of the post of the Congress president. There is no one but the Gandhis to lead the party, yet former president Rahul Gandhi does not want to take up the mantle after the crushing defeat of the party under his leadership in the 2019 elections. It is indeed noble to own up moral responsibility for a defeat and to quit the field altogether, but Rahul is still very much the party’s most influential campaigner. Congressmen, obviously, do not understand the concept of most things moral, but they do have a strong argument when they seek an alternative, full-time leader, in case Rahul has decided to quit organisational politics altogether.

Sonia will not have anyone other than Rahul as Congress president and Rahul does not want to become the party president, nor has he publicly nominated his successor. This conundrum merits a solution. Sonia wants to keep the Congress leadership a family affair and it makes sense as there cannot be altruism in politics. Why should she part with an organisation that she rebuilt since 1998, taking it to power twice in 2004 and 2009? There can be two possible ways out of this morass. The easiest and the most romantic one is that of a charismatic challenger snatching the organisation away from the Gandhis and rebuilding it, just like Sonia grabbed it from Sitaram Kesri and re-established the Congress Raj.

Well, in politics as in life the easiest solution often does not exist. There is not a single Congress leader who can take over the party or even lead a split the way Mamata Banerjee, Sharad Pawar or Jaganmohan Reddy created a political platform in their own geographical spheres of influence. The fact that the Congress has not split despite two humiliating defeats in general elections and several demoralising reversals in the states only proves that there are no challengers within the organisation. There cannot be a challenge from the outside without a sizeable chunk ready to junk the Gandhis and invite the challenger, which is also not the case now.

A merger of splinter groups will only be perceived as a hostile takeover bid of the mother ship by old underling-turned-competitors. In this situation a possible way out could be to take a leaf out of history books and turn the Congress president into a person who presides over an All India Congress Committee (AICC) session. Mahatma Gandhi was Congress president only once and that does not mean that he did not influence the course of Congress politics — he charted it, in fact. Madan Mohan Malaviya was president on several occasions but his opposition to the Non-cooperation or Quit India movements did not really matter. In the pre-Independence times, the Congress had annual sessions and they were known for the cities where they were held rather than the people who presided over the presidium.

None of the presidents could rival Gandhi’s moral authority over the Congress and even the militaristic patriot Subhas Chandra Bose gracefully quit the presidency rather than mount a challenge to the person he later referred to as “Father of our nation” in a radio broadcast. So, the Congress can revive the practice of annual sessions or modify it to have biannual sessions, inviting mass leaders from across the country to preside over those meetings. Mass appeal need not be the only qualifying criterion; there could be intellectual giants and political thinkers chairing the proceedings as president of different sessions. Such a practice can begin at the next AICC session, which could be chaired by former Prime Minister Manmohan Singh — there cannot be a better person or a more accomplished and scholarly Congressman to inaugurate this transition towards a new organisational structure.

The structural levers of the party can still remain with the Congress Working Committee and the general secretaries, yet allowing the party to enlarge its footprint by bringing in new ideas, new talent and, most importantly, greater national participation of bigger crowd-pullers. For instance, the CWC can call Mamata Banerjee over to chair a session, infusing the electrifying energy of the big mass leader into a moribund hierarchy. The old practice of double membership can allow the Congress to become a platform of competing ideas and an umbrella of converging interests. Sharad Pawar is an ally who would bring in his own charismatic appeal into a session, if he is given the offer to chair it. It will obviously be a matter of privilege for most politicians if they are invited to the presidium of another party, and that too to hold the gavel. An Akhilesh Yadav or an MK Stalin at the AICC podium might send a message of inclusive politics of humility hitherto unbeknownst to the Congress leadership.

The Congress has always been a crowd, never a cadre-based party. The Congress should go back to being that crowd of clashing titans, competing political entrepreneurs, feuding regional satraps — with the centre holding it all together. Crowds and campaigners change the mood of the nation, not apparatchiks. Come to think of it, Amartya Sen could chair an AICC session, inviting former Kerala health minister KK Shailaja to explain how she tackled the deadly Nipah outbreak or managed to keep the Covid case fatality rate so low despite the second surge; he might also want Gujarati poet Parul Khakkar to recite her poem, Shav Vahini Ganga.

Bollywood Rewind | Awara: Of nature vs nurture - The Indian Express

Learn from defeat too: PM Modi to BJP leaders – The Indian Express