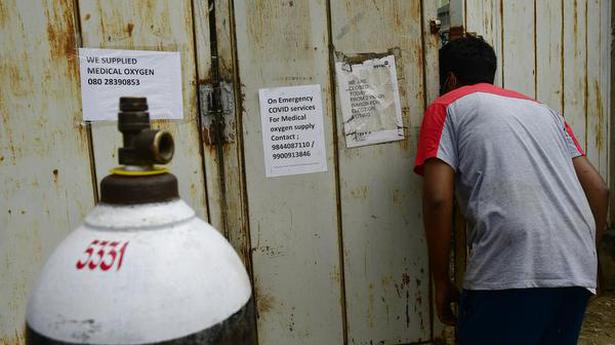 Rajendra Prasad, an oxygen refiller from Mandya, said the breakdown of oxygen plants was long coming

The breakdown of the oxygen production plant in Ballari, was “inevitable and bound to happen”, according to insiders in the oxygen industry. Other oxygen producers fear their plants may also breakdown any day now, given they have been running 24×7 for nearly two months with no breaks for maintenance in order to meet the demand for medical oxygen during the second wave of the pandemic.

Subasish Guha Roy, promoter of Universal Air Products Pvt. Ltd., runs a 45-MTD capacity oxygen production plant at Kunigal, one of the seven medical oxygen production units in the State. He expressed concern over the lack of a break for his plant. “With the plant operating almost 24×7, it has developed some snags and its production capacity has also reduced by around 15%. We need to replace some compressor filters and other parts in our plant, but are unable to do so as the demand for oxygen refuses to subside. We thus cannot afford to switch off the plant,” he said.

Mr. Roy said this was not healthy and all the seven plants in the State were at the risk of a breakdown any day. Multiple plants breaking down simultaneously could pose a big risk for the State’s oxygen security, he added.

Rajendra Prasad, an oxygen refiller from Mandya, said the breakdown of oxygen plants was long coming. “Electric crematorium furnaces are breaking down in the city because of being overworking; so will oxygen plants,” he said. He added that the State and Union governments have to factor in and plan the maintenance of these plants for long-term oxygen security.

“Each of these plants has to now be given timeouts for maintenance by turn to avoid serial breakdowns. The Union government, which has centralised the grid, has to allot additional oxygen to the State to ensure the plants taking time off for maintenance does not affect the oxygen supply,” he said.

Now that the COVID-19 caseload is dipping, oxygen demand is also manageable and this is the right time to put plants under maintenance, said Mr. Roy.

Deputy Chief Minister and COVID-19 task force chief C.N. Ashwath Narayan said the government would discuss with all the stakeholders in the sector and try to provide time for maintenance of oxygen plants.